25 Useful jQuery Plugins to Integrate Twitter into Websites with ease

Twitter has become increasingly popular for having short and dynamic conversations online. Since twitter is a very open platform several hundred tools for using it more effectively has been released.

I think very few people actually use twitter.com for sending tweets, reading direct messages etc. Twitters openness  have proved to be a great strategy! Another trend in social media is integration of tools like twitter into blogs and websites. The idea is great as visitors to a blog or website may find the tweets listed interesting and consider following to get more tweets.

This is certainly an effective approach compared to just adding a “follow me on twitter” button, but it will be worse if you are not using twitter actively. This article lists 25 jQuery plugins you can use to integrate twitter into a blog or website – jQuery as always makes it easy use so there is no excuse any more!

In the resource section in this article you will find previous articles we have published listing twitter tools you may want to check out.

Inviting tweets to your website is a new method of integrating with others and adding liveliness to your website. For this you just need a Twitter account and Juitter which is a jQuery plugin which helps you to display tweets using the defined keywords.

Never worry about the hassles of displaying the latest tweets even if you have multiple accounts. The plug-in ‘Tweet’ can display tweets from the feeds, queries and users from various lists.

If you are a person who want to add effects while your webpage displays new tweets then install this plugin to achive effects like slide duration, show / hide profile link and show / hidetime stamp and also you could add an alternative content by including a link to your twitter profile in case your javascript is disabled or plugin fails. 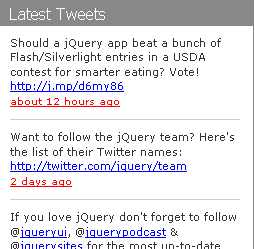 This site gives you a description of a jQuery plugin which retreives the details like such as count of followers & following , full name, homepage URL when given the Twitter username. With the help of this plugin you could also create another plugin which can also display the avatar image.

Organize the tweets in your webpage using the timeline feature and display the tweets from the new ones to the oldest ones. This tutorial helps you to create your timeline plugin using jQuery and CSS and gives you a demonstration of using them in your website.

Rolled out a new feature by Twitter is to create lists, i.e you can have an exclusive group profile of people of similar interests such as
sports, business, music, fun etc. This tutorial demonstrates to create a twitter list with the help of an AJAX based widget.

Keeping a live record of the Twitter track back can be a tough task, but this plugin allows you to keep track of the people who retweet you and also you could display the tweets of friends as a tool tip when moving over their pictures.

To display your friends latest tweets, combine tweets from multiple accounts and modify it accordingly to your likings is taught
in this tutorial with the help of jQuery.

Update your tweets on your web page live with the help of livetwitter plugin and show tweets from the time line of a user.
Given is a project for updating your Twitter search plugin with the help of LiveTwitter.

Tweetable is a jQuery plugin which shows tweets that also include urls of your post. With the help of Tweetable you could limit the
number of tweets for display, highlight the links as well as replies.

Add a real time tweet bar of your posts from the twitter time line or limit the tweets only by certain users. This demo shows you to
limit your search to certain users, return tweets by users located within a given radius of the given latitude/longitude or Show or
hide some parts of the tweet like avatar, author name, date.

The easiest way to share is by a retweet button, we may like it to design according to our website which is made possible by the jQuery plugin.  This demo shows you how to build your button and also style it from the scratch.

List out the most popular posts with the help of this widget from Twitter timeline, or posts of any selected period of time of any keywords say, today, this week or month, or calculate your scores with the number of people who are affected and talked about those links.

Everybody searches to find their tweets which mentions their user name. So mentions are used for this purpose. In this link Twitter Mentions plugin allows you to a add an unordered list what listens what others have to say about @users.

You could use API to return your Twitter search results every 30 seconds. This is made possible with the jQuery, PHP and AJAX
with the Twitter API. Learn the how-to-do from this tutorial.

A best way to update your information, staying connected with friends and colleagues and be knowledgeable about the latest happenings around you is made possible through Twitter, So to share your twitter updates on your website, you need jQuery plugins which are created exclusively for Twitter.

Often we miss out the previous contents while moving on to the next page, so here is ‘unlimited scroll using
jQuery for you where you don’t click for the next page, and the next page is automatically loaded when you reach the
end of previous page increasing your scroll space in Twitter.

Reference about our blog or webpage by somebody else in Twitter or tweetbacks can be directly integrated to our blog
with the help of this jQuery plugin ‘Boastful’.

Now displaying your tweets have become quite easier with jQuery plugins which could become chaotic at times, so we
have ‘Tweetquote’ jquery plugin which displays only those tweets which are filtered after your search.

You can display tweets from Twitter authors with ‘rjsTwitter’ which behaves like a client for Twitter. Check whether
the tweets are free and include only their screen name, and you can later configure other details.

We have displayed our tweets in the blog now, but what to do if we want to differentiate or highlight certain tweets?
‘Tweetstyler’ plugin comes handy here which helps you to change the background color or text color or other formatting in some of the tweets.

Simple plugin to show tweets from Twitter in your web site.

This plugin displays avatars of people who have recently followed your twitter account and tweeted your link.It would be useful when you have a new project launch and you need to encourage people to follow & tweet it by showing their Twitter avatars!

Great post – Just subscriped to your RSS feed.. Thanks, is this a regular template?

Thanks for the tip!

Might also want to take a look at http://itickerapp.com?

I’m very new to jquery and the Twitter API, but simply looking for a plugin that can display tweets from multiple defined users (e.g @brendoncole, @hostelbars, …) and (not or) a specific #hashtag.

Do you have any recommendations?

Some excellent resources, will definately check these out. Many thanks!

The plugin is under MIT license and any one can use it even for commercial applications.

25 Useful jQuery Plugins to Integrate Twitter into Websites with … » KHMER855.COM